While in Kansas City I was curious about what route the GPS in my Tesla would calculate to get to Chicago. The below photo shows the route that the Tesla GPS calculated: 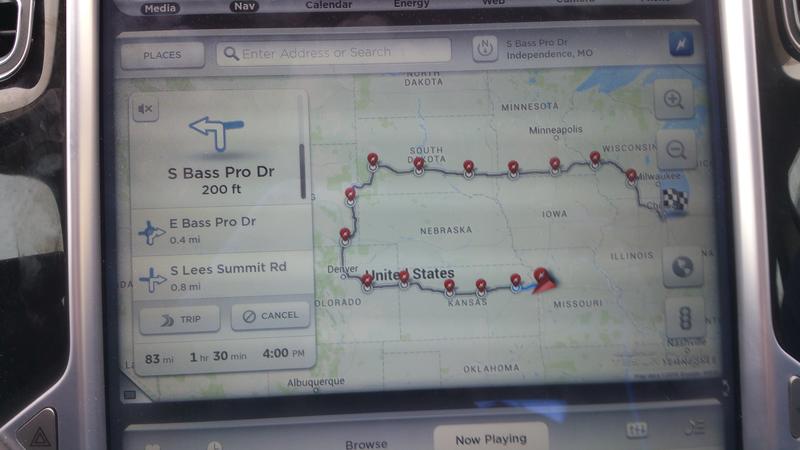 The above route is a journey of almost 2,000 miles to travel between two cities that are only about 500 miles apart! (Note: A few days after the above photo was taken of the route suggested by the Tesla GPS, a new Tesla Supercharger location became active in Council Bluffs, Iowa. In September 2015, a Tesla Supercharger location became active in Columbia, Missouri. Thus, it is now possible to easily drive from Kansas City to St. Louis and continue on to points further east, and vise versa. However, to get from Kansas City to Chicago and vise versa, the shortest and fastest route is still to stop at the Tesla HPWC at the DepotInn.com in La Plata, Missouri.)

But, there is a "secret" route that the Tesla GPS will not calculate for you that is far quicker and more direct. When you are in the Kansas City area you will first need to obtain a full charge at the Tesla Supercharging Location in Independence, Missouri. While you are charging up, select the "Destination Charging" option on the Tesla GPS screen. You will see a display similar to the below: 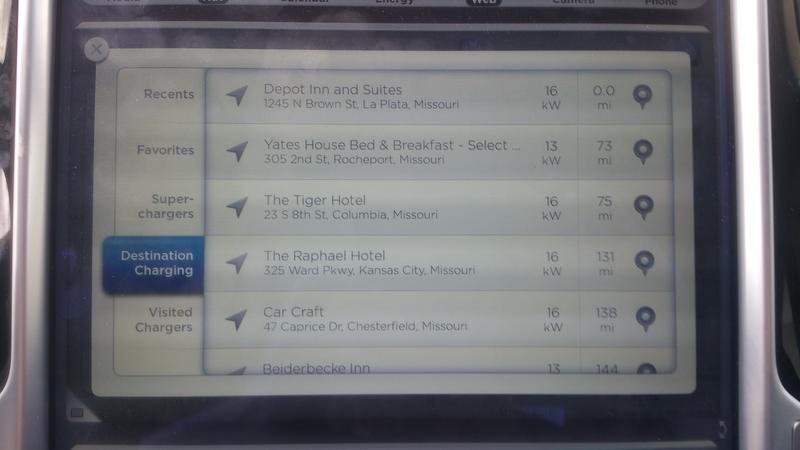 In the list look for the item labeled "Depot Inn and Suites, 1245 N Brown St, La Plata, Missouri" and select that item. On your screen it will probably not be the first location on the list and it will show a distance of around 167 miles rahter than 0.0 miles. After you have selected that item the Tesla GPS will calculate a route that looks like this:

Once you arrive at the Depot Inn and Suites you will find two 80 Amp High Power Wall Connectors (HPWC) in the parking lot behind the hotel as well as one 40 Amp J1772 EV Charger. Just pull into an available parking space and start charging! You do not have to be a hotel guest to use this Tesla Destination Charging location and there is no fee to charge. You will want to charge all the way up to travel the next leg of your journey which will be a stop at the Tesla Supercharger in Springfield, Illinois, on the way to Chicago.

While you are waiting, step into the luxurious hotel lobby for a free cup of coffee and to use the public restroom in the hotel. Be sure to browse the Silver Rails Country Tourist Information Center in the hotel lobby and take one of the free maps of Silver Rails Country. For more information, visit: www.silverrailscountry.com. Feel free to relax in the hotel lobby while waiting. There is a television and free open Wifi in the lobby. The Wifi coverage extends out to the parking lot so you can use it from inside your Tesla if you wish and even link your Tesla to the hotel's free Wifi.

If you are hungry there is the highly rated La Pachanga Mexican Restaurant next door. There is also a Casey's a couple of doors down if you are looking for snacks, pizza or beverages to go. Also next door is a bank with a 24 hour ATM. Across the street is a Dollar General and the "Spirits of La Plata" liquor store which has a decent select of wine, beer and other spirits.

If you wish to spend the night at the Depot Inn and Suite call the hotel at 888-814-3669 to make reservations or visit DepotInn.com. The rates are excellent and it is highly reviewed.

Once your Tesla is fully charged and you are ready to resume your journey, use your Tesla GPS to select your destination in Chicago or points beyond. You will see a display like the following on your Tesla GPS screen: 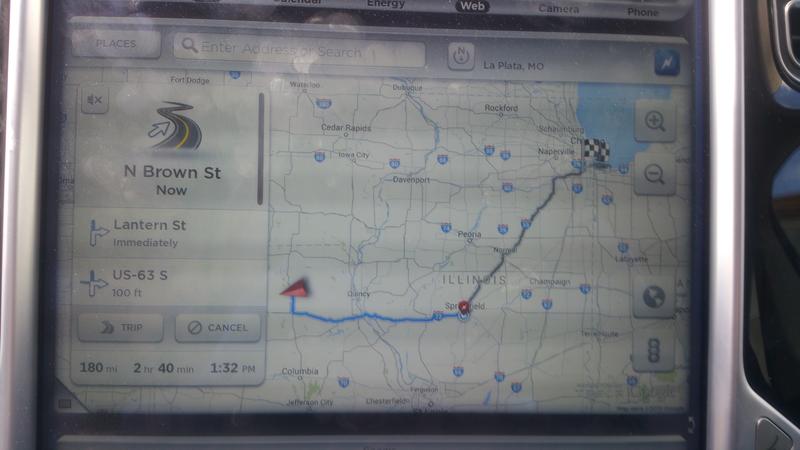 It will show you that your next stop will be at the Tesla Supercharger in Springfield, Illinois, about 180 miles from the Depot Inn & Suites in La Plata. Your total travel distance will be about 510 miles rather than the almost 2,000 mile route provided by the Telsa GPS calculations. This shorter route, of course, also works in the reverse direction coming from Chicago and further points east to Kansas City and further points west.

A shorter and faster route again would be to stop at the Tesla Destination Charging Location at the Depot Inn and Suites in La Plata, Missouri. The journey from the Tesla Supercharger in Independence, Missouri, just outside Kansas City to La Plata is 175 miles and the journey from La Plata to the Tesla Supercharger in St. Charles just outside St. Louis is 171 miles. That is a total distance of 346 miles rather than the 2,210 mile route provided by the Tesla GPS.

The reason the Tesla GPS provides such long routes between these cities is that there is currently a gap in the location of Tesla Superchargers between Kansas City and St. Louis on I-70 in Missouri. Eventually Tesla will be installing a Supercharger near Columbia, Missouri, on the I-70. Once Tesla does that, the Tesla GPS calculated route between each of these cities will be closer to the shortest routes possible between these cities. But in the meantime, a stop at the Tesla Destination Charging Location at the Depot Inn and Suites is the most reasonable and shortest route.

Even after Tesla installs a Supercharger in Columbia, Missouri, taking the route through La Plata and stopping at the Depot Inn and Suites might still be the best route to take. For more information as to why, please visit: www.teslatouring.com/lap-tdc-sw.html 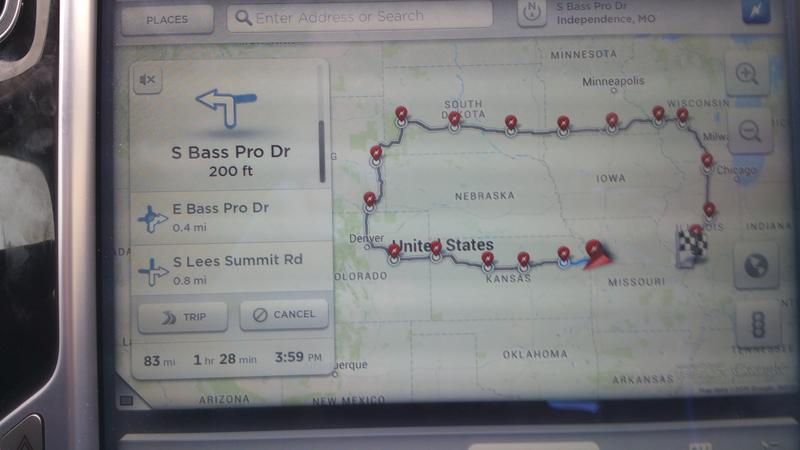 CLICK HERE
for Detailed Information about driving this route.