For the Tesla Model S, this may be the new best route between Chicago and Kansas City and points beyond in either direction. If you plan on driving a Tesla from anywhere in the southwest to the northeast of this nation, or vise versa, this article may be of interest to you.

There is a new Tesla Destination Charging Location (2 Tesla 80 Amp HPWC) at the Depot Inn & Suites, 1245 N Brown St, La Plata, Missouri. The location is right on Highway 63 at MO Hwy D Exit in La Plata. This location can easily be reached with a full battery charge from the Tesla Superchargers in Kansas City, St. Louis, and Springfield, Illinois.

If you are heading from the southwest through Kansas City on your way to Chicago or beyond, the shortest route is to charge up at the Independence Tesla Supercharger just outside Kansas City and head for this new Tesla Destination Charging Location.

If you are heading from Chicago, or from other points east through Chicago, to the southwest, the shortest route is to use the Tesla Superchargers in Normal, Illinois, and Springfield, Illinois, before heading to the Tesla Destination Charging Location in La Plata, Missouri. If you need to charge up before leaving the Chicago area, there is a Tesla Supercharger at County Club Hills just outside of Chicago.

Google Maps suggestion for driving from Chicago to Kansas City is to drive south on I-55 to Springfield, then west on I-72. I-72 turns into Highway 36. Highway 36 will take you to Macon, Missouri. The Tesla Destination Charging Location at the Depot Inn & Suites in La Plata, Missouri, is just 21 miles north of Macon, Missouri, on Highway 63. If you are traveling on a long road trip beyond Kansas City, you might want to make the Depot Inn & Suites your first overnight stop as you will already have traveled about 380 miles in 7 to 9 hours by then (including the Tesla Supercharger stops along the way). But if not, that is OK, as this Tesla Destination Charging Location is open and free to all, not just hotel guests. After charging up in La Plata, head back down Highway 63 to Macon and resume your westward trip on Highway 36 until you reach I-35. Head south on I-35 to Kansas City. The total length of this journey is 510 miles, plus the 42 mile detour to the Tesla Destination Charging Location in La Plata.

Eventually Tesla will be opening up a Supercharger in Columbia, Missouri, which will create an alternative route from Chicago to Kansas City, and points beyond. Taking I-55 all the way south to St. Louis and then west on I-70 is 544 miles, not much less than the prior route including the detour to La Plata. However, taking this second route is 8 hours of just driving time. If you include the additional time needed to charge in St. Louis and Columbia, as well as Normal and Springfield, you are looking more like a 10 to 12 hour trip. Personally I'd rather take a break after 7 or so hours of driving and just sleep while my Tesla is charging. Even if you do go straight through to Kansas City, you most likely will be getting a hotel there after the 10 to 12 hour trip. So why not instead take a break a couple of hours earlier at the Depot Inn & Suites and charge up your Tesla while you sleep? The Depot Inn & Suites room rates and quality of accommodations are far better than most similar hotels in the Kansas City metropolitan area.

If you are driving up from anywhere in the Southwest and plan to go through Kansas City on your way to Chicago, or points further east, the same above suggestion applies but just in reverse. 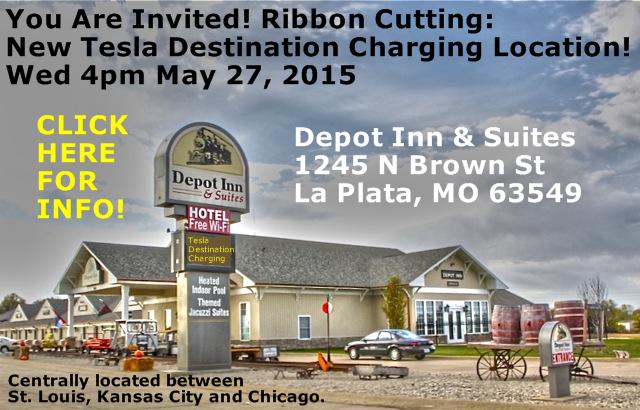 CLICK HERE for the main page of the Depot Inn & Suites.