Some things I learned at TMC Connect 2015:

You can not set the Tesla Model S cruise control any higher than 90 MPH. Really? I never tried setting it that high. Evidently some people have. Especially in Germany where there is no speed limit on many segments of the Autobahn. Some complained that the cruis control on the Tesla Model S is useless on the Autobahn as they never travel on it as slow as 90 MPH! Evidently there is some talk within Tesla of allowing the cruise control to be set to higher speeds, at least in Germany.

Once this new assembly line is fully up to speed, it will be producing Model X and Model S vehicles in the sequence in which orders are received. Tesla does not expect to produce big batches of just Model X and then switch over to big batches of Model S, and then back to Model X again, etc. This new assembly line will be capable of building Model S and Modex X vehicles intersperced with each other on the line.

For those of you that might not already be aware, giant rolls of aluminum sheet metal arrive at one end of the factory and completed Tesla vehicles roll out the other end of the factory. This complete vertical integration has rarely been seen in an auto manufacturing plant since the days of the original auto plants built by Henry Ford. Most automobile plants have the various components built at many different facilities, often at independent vendors from all over the world, and then just assemble all the parts together at the plant. In order to keep cost down while achieving maximum quality and flexibility, Tesla does most of the manufacturing right in the Fremont Tesla Factory.

On the factory tour we also saw some of the Tesla energy storage units which are also currently being manufactured at the Fremont location. In the future, the assembly of these systems is likely to be moved to one of the other many other buildings that Tesla has acquired recently.

It appears that there is little sign yet of any significant long term battery degradation in the Tesla Model S and Roadster even in cars older than 4 years and more than 90,000 miles.

TMC Speaker: Might as well drive as fast as you can between SuperChargers. You aren't going to save any time charging by going slower since SC charges much faster than you can drive.

TMC Speaker: info about Destination Chargers wrong most of the time. Most are 80amps and will let you charge even if not staying at the hotel. Call ahead just to make sure.

Tesla is not providing any estimates yet of when the first autopilot features will be released.

The Tesla Factory is the largest factory in the US west of the Mississippi but will be superceded by the Tesla battery gigafactory in Reno.

Tesla is lookind at getting the batteries from the Reno Gigafactory to Fremont by railroad.

It is suggested that the Tesla be set to charge at 11pm even if you don't have Time Of Day pricing. It will move demand off the peak demand time of the grid and benefit grid capacity.

Getting ready to drive from Anaheim to Santa Clara, California, to attend TMC Connect 2015. Yes, I know, not supposed to take a fine car with 8 layers of paint through an automated car wash. But, I don't have the time or funds to have the car detailed twice per week. And, being a black car, that is how often this car needs to be washed to keep it looking clean. To compound my sin, the is a cloth car wash and not a "touchless" car wash. There are some good "touchless" car washes that do a fantastic job of cleaning the car, but the "touchless" car washes in my area do a very poor job of cleaning the car. The cloth car wash isn't the greatest, but it is the best in the area.

First charging stop at Tejon Ranch Tesla Supercharger. More Tesla vehicles here than I usually see here on my travels, but there were a lot of Tesla vehicles on the way to TMC Connect 2015.

Final charing stop on the way up: Gilroy Tesla Supercharger

Stopping off for a little Jazz at the Hedley Club in Hotel De Anza in San Jose.

Topping off at the Mountain View Tesla Supercharger before turning in for the night.

Getting my computer set up before heading to bed.

View of the Santa Clara Convention Center where the TMC Connect 2015 event is to be held.

Hanging around the Tesla Factory in Fremont, California, waiting for our TMC Connect 2015 12:30pm scheduled tour of the factory.

A couple of photos of my Tesla Model S P85D charging up at a supercharger at the Fremont Tesla Factory.

Arrived at 4pm to register for the TMC Connect 2015 convention, but the name badges hadn't arrived yet.

Name badges arrived about 5:15pm, but they were not in alphabetical order. So they spread them out on the registration table where it was a free for all of each attendee looking for their name badge. Meanwhile a number of volunteers were getting the badges sorted.

We finally found ours!

Long line to collect the rest of our registration materials.

Photos of the exhibitors / vendors at TMC Connect 2015.

Parking next to another Tesla with license plates from Washington State, and oddly a couple of fedoras on the dashboard, like the hats that I wear.

A regular EV Charger at a handicapped parking space at the Santa Clara Convention Center.

Topping off again at the Mountain View Tesla Supercharger.

TMC Connect 2015 Breakfast on Sunday morning at the Hyatt in Santa Clara, California.

Charging up at Gilroy.

Charging up at Harris Ranch. 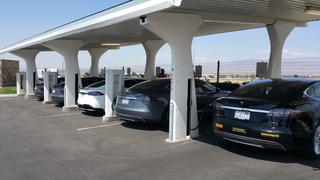 Charging up at Tejon Ranch.